As the countdown continues toward the 50th Anniversary of Woodstock later this year, I am reminded of an old joke that still elicits chuckles and knowing smiles:

Q:  Why has it taken so long to legalize marijuana?

A:  The hippies kept forgetting where they left the petitions!

The point, of course, is that one well known side effect of marijuana use is forgetfulness … at least that is what they say.  If this is true, then impaired memory may be one of the reasons why the planning process for this shindig has been so disjointed … perhaps the organizers simply forgot.  After all, with only fifty years to pull the arrangements together, it is easy to lose track of time.

This is not to suggest that those putting together this gala are dabbling in weed, Mallomars and cheap wine, but this is starting to look a lot like the way plans were made for the original event in 1969 … and we all remember how that turned out!  With the recent departure of a major event organizer, the folks at Bethel Woods are now advertising a “scaled down” gathering which is probably just as well; few of the original bands are performing any more and, those that are, don’t seem up to taking part.  Roger Daltrey of The Who, for instance, let it be known that he won’t be performing in August because, well, it is just too darned hot.

So what are we veterans of “Woodstock Nation” to do?  Should we gather up our tie-dyed outfits and huarache sandals, fill our backpacks with yogurt and granola and head toward Bethel in our VW minibuses?  Or should we just stay home and listen to some classic 78s on the Victrola while sipping Boone’s Farm at room temperature?  Talk about a tough choice!

Speaking just for us, we will be making the long trek back to Yasgur’s Farm in August and, much like wildebeest migrating across the Serengeti, we are not exactly sure why.  Along the way we expect to see other Bethel-bound vehicles with “Woodstock or Bust” signs in the rear window, as we all harbor hopes that an anniversary event will actually await us when we get there.

As plans for our journey come together, I am reminded of the movie “Vacation,” and the way the Griswold family’s torturous cross country trip to Wally World ended.  Having finally made it to their destination, the Griswold’s excitement was short-lived when they found that the place was closed for renovations … and things deteriorated quickly from that point.

Candidly, the “Wally World” scenario is the one I fear most … tired from our long drive … our car dusty from the road … laden with hippie paraphernalia … we make the right turn from Route 17B onto Hurd Road … and pulling up to the gate we see ……….. 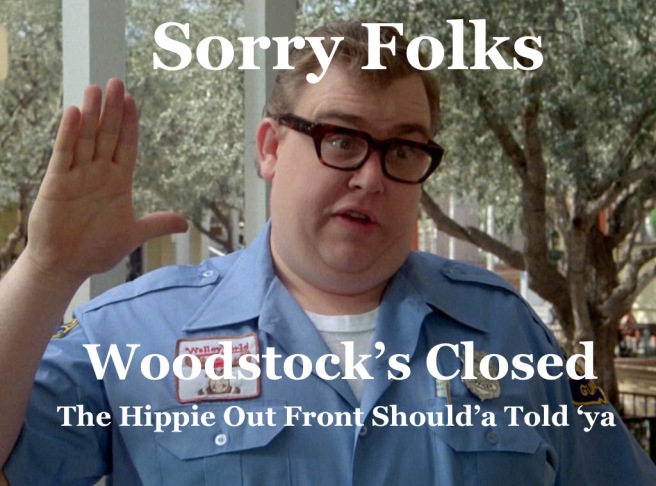 Dan is a retired police officer and law enforcement educator who enjoys writing about things near and dear to his heart. View all posts by danbonbooks

Dan Carlson is a retired police officer and law enforcement educator.  After his career with the New York State Police, he joined the Institute for Law Enforcement Administration in Plano, Texas, where he developed programs and taught – internationally – on law enforcement management, leadership and ethics.  Married for more than fifty years, he and his wife, Bonnie, reside in the great state of Texas in close proximity to their three children and seven grandchildren.