So anyway, I’m sitting here trying to come up with some Christmas gift ideas for my bride, when my eyes fall upon an ad for something called “Instant Pot.” Whoa! Can this really be what the name suggests? Has some genius finally designed a system for creating weed without having to go through the whole planting, cultivating, and harvesting thing?

Alas, upon reading further, the full details of the “Instant Pot” became clear … it is nothing more than a new kitchen appliance that can be used to cook a wide range of foods in a variety of ways. Sigh … well, I guess that is a pretty good idea as well.

In my defense, my initial thoughts about this product were likely driven by fond reminisces of my recent visit to the site of the 1969 Woodstock Festival, and the fact that 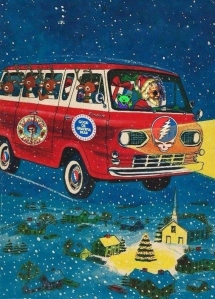 the 50th Anniversary of that singular event is just over the horizon. But come to think of it, perhaps there is more to it than just that … maybe there is, as some have suggested, some sort of a magical connection between Hippies, marijuana and Christmas.

There is even some speculation that Santa, himself, may be an occasional toker. Those who take that position cite, as evidence, several of his well known behaviors that are common to regular users of marijuana. For example:

Munchies It is a well known fact that smoking marijuana creates an appetite for copious amounts of tasty and binge-worthy food. Santa loves cookies … think of how many he eats in just one night!

Forgetfulness One notable side of effect of marijuana use is the way it is said to affect memory. Santa needs to keep a list for everything and, as we know, he has to check it twice. The guy can’t even remember who’s naughty and who’s nice!

Paranoia Like many marijuana users, Santa goes to great lengths to conceal his location and even his very existence!

Always Happy Stoners readily admit that, when high, it is difficult to suppress their giggles. Santa is always smiling, laughing and generally jolly. What does that tell you?

As we all cross our fingers wondering what we will find under the tree on Christmas morning, stoners can breathe easy. In North Pole, Alaska, a member of the city council by the name of Santa Claus (yes, his real name) took exception to a recent ordinance that prohibits a marijuana business in his city. He even went public with his objection noting: “Cannabis users will not be getting coal in their stockings unless they have done some other thing that might be considered egregious.”

Dan Carlson is a retired police officer and law enforcement educator.  After his career with the New York State Police, he joined the Institute for Law Enforcement Administration in Plano, Texas, where he developed programs and taught – internationally – on law enforcement management, leadership and ethics.  Married for more than fifty years, he and his wife, Bonnie, reside in the great state of Texas in close proximity to their three children and seven grandchildren.